A Day to Remember

Words are even more feeble on this Memorial Day, for the sight before us is that of a strong and good nation that stands in silence and remembers those who were loved and who, in return, loved their countrymen enough to die for them.

With this observation, Ronald Reagan acknowledged the reverence accorded Memorial Day. Although informally viewed as the start of the summer season, Memorial Day is dedicated to honoring those of our fellow citizens who died in service to our country. It originally was known as Decoration Day, reflecting a practice begun after the Civil War whereby Americans would pay tribute to fallen soldiers by placing flowers on their graves and offering up prayers. Over the years, with the sad increase of our nation’s wars to defend freedom, it has grown from a holiday limited to one conflict into a holiday honoring all our nation’s fallen. 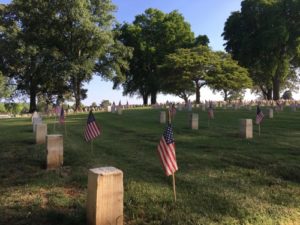 This year, Memorial Day takes place during a pandemic, and thus, it reminds us of the double sacrifice of our military during World War I. As the first World War raged, the world also faced repeated waves of the Spanish Flu. Striking those in the 20-to-40-year-old age bracket more severely than others, it travelled with troops as they moved. It was particularly virulent; indeed, a number of sources cite death from the Spanish Flu as the source claiming more of our nation’s over 116,000 military dead than combat (63,114 versus 53, 402). In a sense, then, on this Memorial Day, as we face the unseen enemy of the current pandemic, we can appreciate, at least in a small way, the significance of what the World War I soldier experienced as we respect and honor their supreme sacrifice along with the supreme sacrifice that other soldiers made for love of country.

As you enjoy time with your families in safe, socially distanced activities, perhaps you might consider offering a moment of silence for our fallen and be on guard not to fall victim to the lost historical memory, about which, Franklin D. Roosevelt warned when he said, “Those who have long enjoyed such privileges as we enjoy forget in time that men have died to win them.” Indeed, may we never forget.

The Coalition wishes God’s blessing to you, to your families, and to our great, exceptional nation on this Memorial Day.