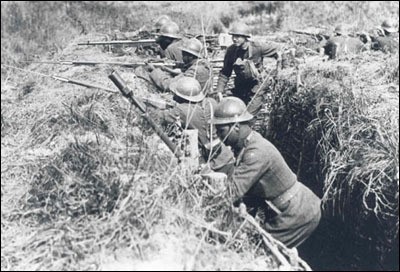 This week, with the celebration of Veterans Day, our nation again honored those selfless souls that stood in harm’s way to defend our freedom. By so doing, it reminded all that the blessings of liberty and self-determination enjoyed by Americans have been achieved and sustained by the sacrifice of others. One such soul was Henry Johnson who, on a spring night in 1918, demonstrated tenacious courage in the Argonne Forest.

At 5-foot-4 and 130 pounds, he enlisted in the all-black 15th New York National Guard Regiment. The name of this regiment changed and became the 369th Infantry Regiment (named by their German enemies the “Harlem Hellfighters” for their unwavering ferocity in battle) when it traveled to Europe with U.S. military forces to do battle with German soldiers.  Johnson and his fellow soldiers were sent to a short-staffed French Army unit on the front lines of combat. He and another private, Needham Roberts, were provided French equipment and schooled in basic language so they could perform their duties.

Overnight on May 14-15, Johnson and Roberts were assigned sentry duty.  Soon, Johnson heard perimeter fence wire being clipped, and he and Roberts began tossing grenades to drive back the intruding forces.  The German soldiers charged the two with bayonets at the ready.  Shots rang out as they continued trying to repel the invaders with grenades until their grenade supply was exhausted.

Roberts was disabled. The German soldiers kept charging and tried to take him prisoner.  Johnson would have none of it. Despite being wounded repeatedly, when his rifle jammed, he used the butt end to fight the advancing enemy troops. When his rifle became completely useless, he took hold of his last weapon, his bolo knife, and began stabbing at German soldiers. By then, American and French troops were moving onto the scene, causing the Germans to retreat while Johnson, after sustaining 21 wounds, was dragging Roberts away to safety. All told, “Johnson had killed four Germans and wounded an estimated 10 to 20 more.”[1]

Johnson held the line, and for his efforts, President Theodore Roosevelt identified him among the five bravest Americans to serve in World War I.[2] He and Roberts were awarded the Croix du Guerre in the presence of their French comrades in arms, and Johnson’s medal included the Gold Palm for his valor.  Sadly, Johnson’s heroism and valor would not be recognized by his home country for decades, for he entered the military, served, and returned home in the days of segregation. He died a decade after the war.

Eventually, Johnson would receive posthumously the Purple Heart and the Congressional Medal of Honor.  Though not a perfect cure for the treatment Johnson endured, in a certain sense, this recognition at least provided a modicum of justice where justice certainly was due. His story, however, provides lessons for reflection on Veterans Day. For instance, we recognize that some soldiers, notwithstanding the fact that they did not enjoy the fullness of their status as citizens, still viewed this nation as worthy of their direct efforts to defend.  So too, we see that this nation, though not perfect, strives toward perfection and seeks to right injustice in furtherance of a more perfect union. Finally, we are reminded that this nation provides hope to the world, and that hope only exists because our veterans put their lives on the line to sustain it.  We owe these courageous people our prayers and appreciation.

[Those wishing to explore the life of Johnson and his heroism can visit the links in this note that served as the sources for this blog.[3]]