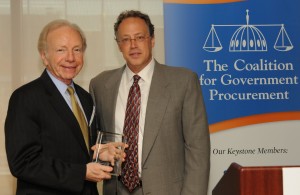 Throughout their careers, Senator Lieberman and Senator Collins have worked tirelessly for common sense solutions to the procurement challenges facing our federal government.

Senator Lieberman was an early co-sponsor of the Federal Acquisition Streamlining Act of 1994. Based on an analysis of hundreds of acquisition laws, FASA streamlined the acquisition process. It established commercial item contracting as a critical norm in government procurement, which profoundly changed the way government purchased goods and services. I saw its effects first hand as an attorney at GSA. The era of government detailed specifications and item descriptions ended. Instead, where it could, the government bought commercial products and services. This increased access to the commercial marketplace spawned an increase in competition, which reduced procurement cycles, triggered savings of billions and billions of dollars from downward price pressure, and, equally as important, opened the government to technological refreshment with new innovations. I also witnessed this fundamental change throughout government with an increase in value to the agencies. From my viewpoint, after spending 25 years in the procurement trenches, I would submit that the Competition in Contracting Act (CICA) and FASA remain the two most important, ground-breaking procurement reforms that have saved the taxpayer’s money.

Senator Lieberman has been a staunch supporter of competition in contracting for years, but it might come as a surprise to some of you that staff leadership of CICA was executed by our second awardee, Senator Collins. Before ascending to the office of Senator, as a staff expert in the Senate, she worked without rest until this landmark legislation was crafted, and when she was finished, Congress laid what is now the prime directive of federal procurement— full and open competition. Unquestionably, this feature alone makes CICA the most profound and important procurement reform of the last century. From the role of sealed bids and negotiated procurements to the statement and use of evaluation criteria (and evaluation of price) to the statement of work requirements, CICA’s imperative of full and fair competition permeates every aspect of our system. Simply put, CICA is the Constitution of federal procurement, providing structure and operational guidance that has saved the taxpayers billions of dollars over the last three decades. 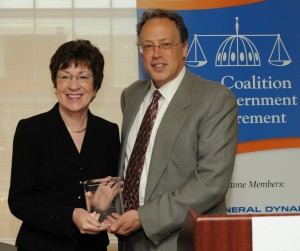 Throughout their tenures over the last ten years as Chairman and Ranking Member respectively of first the Senate Committee on Government Affairs Committee and the Senate Committee on Homeland Security and Government Affairs (I note during the last decade Senator Collins and Senator Lieberman have at alternately served as Chairman and Ranking Member), Senator Collins and Senator Lieberman have worked in a bipartisan manner to address new challenges facing our procurement system; always with the goal of improving the system for government, industry, and most importantly the taxpayer. Again, as a former government employee and as a member of the Service Acquisition Reform Act (SARA) Acquisition Advisory Panel, I have a unique perspective on their efforts. The Senators took the SARA Panel Report very seriously; indeed the Chairman of the SARA Panel testified before the Committee on its findings. Chief among the reform measures championed into law by Senators Lieberman and Collins were: (1) requirements for increased competition for task and delivery orders under multiple award contracts, including the GSA schedules program; (2) the creation of a Contingency Contracting Corps to respond to national emergencies; (3) appropriate limitations on sole source contracts; (4) measures to further prevent abuse and increase accountability, in particular with regard to unauthorized spending through interagency transactions; and (5) measures to improve the federal procurement data system to include timely data regarding interagency contracting actions to provide the public with greater transparency of government spending.

Most recently, Senator Collins efforts to keep politics out of the procurement system reflect yet another common sense approach.

It should come as no surprise to anyone here that our nation faces a significant threat in cyberspace. On a daily basis, those who wish to do us harm or who seek to steal our innovation and know-how probe our networks daily to find points of vulnerability to exploit. The Senators’ Cybersecurity Act of 2012 represents their coordinated effort to confront this problem, but, behind the scenes, it represents so much more for our community.

Over three years ago, the Senators and their staffs began the hard work of defining the problem and crafting a solution. In a sense, if there is a cybersecurity bandwagon today, it is fair to say that they had a leading role in building it. At that time, some thought it made sense simply to leverage the procurement system outright. It took the thoughtful analysis of the Senators to make sure that any use of the procurement process to affect cybersecurity respected, to the maximum extent practicable, the foundational principles of the system: full and open competition and leveraging commercial items and practices. In this regard, they reached out to all stakeholders of the system in an effort to minimize any unintended negative consequences. Their stewardship in this regard is emblematic of their statesmanship, and deeply appreciated by our community.

The problem with honoring two such noble and deserving candidates is that they have an enormous record behind them. Suffice it to say, however, the Senators’ balanced, thoughtful common sense reforms of our procurement system have helped ensure our system continually strives for efficient and effective results and best value for the American taxpayer. Finally, some thoughts on the Senators and the Common Good: Senator Lieberman’s and Senator Collins’ bipartisan efforts to address the challenges of our procurement system demonstrate how achieving the common good need not be blood sport. Their leadership on the Senate Committee for Homeland Security and Government Affairs has and continues to be balanced, prudent, and collaborative approach. They get things done in a positive way, and this constructive approach has resulted in sound solutions for government, industry, and the taxpayer. The importance of the common good is also reflected in their committee staffs, which work together in a collegial, respectful, and cooperative manner. If staffs are a reflection of their Members, then it is safe to say that their bosses are among the finest, open, and decent people you could meet.

We should all thank the Senators for their public service and their “Common Sense for the Common Good.”