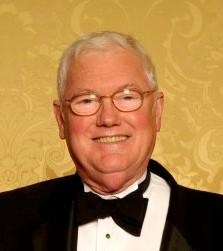 This award, introduced in 1984, is presented to dedicated individuals who have demonstrated a professional lifetime of leading exceptional “common sense” contributions to improving the operation and management of the Federal acquisition process. In addition to Jon, past honorees include Vice President Al Gore Jr., Congressman Tom Davis, and Office of Federal Procurement Policy Administrator Dr. Steven Kelman. We are pleased to add Ted’s name to this prestigious list.

Ted recently retired from his position as Vice President and GSA/GWAC/IDIQ Program Manager at CACI. During his 33-year career with CACI, he led many initiatives that made a lasting impact on both the organization and the acquisition community as a whole. Ted is responsible for standing up CACI’s GSA Program Management Office, where he led a staff that guided clients through contract processes and the effective implementation of solutions. Under the guidance and leadership of Ted, CACI saw its sales skyrocket, becoming a top vendor within the GSA Schedule Program. Throughout his illustrious career, Ted also served in many positions within the Coalition, including as a member of the Board of Advisors and a Co-Chair for both the GWAC and IT/Services Committees. In these roles, he advised Coalition members on the best approaches regarding contract procedures and regulations. Ted was always active at Coalition conferences and committee meetings, posing thoughtful questions and collaborating with government officials to help find the best value solutions that met their needs. Prior to his time in the private sector, Ted served in the Army for 30 years, holding multiple leadership positions before retiring as Colonel in 1989.

Ted is no stranger to receiving prestigious awards, not only for his accomplishments, but also his outstanding character. While serving in the Army, Ted earned numerous honors, including the Legion of Merit with Oak Leaf Cluster (OLC), the Bronze Star Medal with 2 OLC, the Meritorious Service Medal with 5 OLC, the Army Service Medal, and the Republic of Vietnam Gallantry Cross. As an acquisition leader, he earned CACI’s Pinnacle Award, Wing Award, and Aces Club Award for sales and proposal excellence, along with CACI’s Character and Ethics Award. In addition, he was a recipient of the Coalition’s Lifetime Achievement Award, which recognizes outstanding individuals who demonstrate a commitment to advancing common sense in government procurement.

Although Ted is certainly honored for his significant contributions to the acquisition system, his mentorship to acquisition professionals is equally as important. Ted was always willing to use his extensive knowledge to educate others on the process, procurement history, and the latest issues impacting government contractors. His commitment to teaching and strengthening the procurement workforce truly was invaluable. Characteristics that define recipients of the Common Sense in Government Procurement Award include integrity, thoughtfulness, commitment, and transparency, all of which are embodied by Ted. Ted often says, “We are better when we all do better!” We are better for having Ted in our professional and personal lives.

We are thankful for the opportunity to present Ted with this honor to celebrate his accomplished and inspiring career. He is an example for all in our community to follow.